The first day of Rails Summit Latin America was just great. In this post, I’ll try to give an overview of  some of the talks I watched.

Chad Fowler opened the conference with the keynote “Ruby on Rails Insurgencies”. He pointed out that about 50% of our lifetime is spent on work, so we’d better do it the right way (and a lot of people are not doing the right way).

He started off commenting on how he and a group of folks were in the bleeding edge when they began the first RubyConf, back in 2001. Out of this small number of pioneers, five were authors of the Agile Manifesto and eight were well-known book authors. The point is that there were really good people investing their time on “serious stuff”.

He talked about the reasons why companies are resistant to new technologies and ways of doing things (value rigidity). He suggested the reading of “Zen and the Art of Motorcycle Maintenance“. The companies are “guarded by the trolls”, who have FUD :
– does Rails scale?
– ruby is slow!
– we can’t find developers who know
– ruby is unsupportable
– rails is just MVC
– it’s insecure
-…

Chad clarified those misconceptions and then started giving some advice on how to push Ruby/Rails technologies in a corporation. The secret is: do it gradually, so you don’t shock the stakeholders.

Following Chad, Gregg Pollack gave the keynote “On the edge of Rails Performance”. He went over several Rails tools to tackle performance issues of Rails applications. Among them were: bullet, Rails indexes, Scrooge, Rack bug and rubber capistrano.

Carlos Brando spoke about how he created a framework for the development of opensocial applications using some Rails plugings. He discussed decisions regarding architecture (push-based vs. pull based), database ORM strategy, code generation and templates. What I liked about the presentation was the approach he gave on how easy it can be to create a framework in Ruby, reusing existing libraries (after all, Ruby is not all about Rails at all).

In the afternoon, Glenn Vanderburg spoke about his tool for Fuzz Testing of Rails applications: Tarantula. I didn’t know this type of testing until this talk, so it was sort of new stuff for me. Tarantula simply crawls a Rails app, traversing links and looking for potential problems (broken links, XSS and SQL Injection vulnerabilities, etc.). I’m gonna check if there are similar tools for Java applications also.

Following the subject of testing, I saw David Chelimsky talk about some cool features of RSpec. That was a great presentation on nice features of the testing tool like: pending capabilities for tests, implicit subject, explicit subject, custom matchers and wrapped assertions. He also mentioned Spork/Autotest, which are tools that quickly execute all RSpec tests of an application every time a test file is modified (and saved). He is the author of the RSpec Book, which is about to be released. 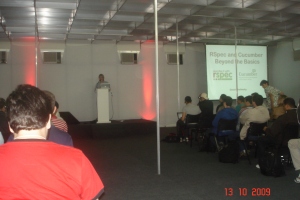 Fabio Akita gave a rather unusual lecture whereby he analysed concepts from the chaos theory and how they relate to agile and organizations in general. He wrapped up by saying that success does not come from a plan, but from the adaptability to the environment (now this has a whole context and is not an excuse not to plan, otherwise we’ll be just blowing away bythe wind).

The last talk was by Matt Aimonetti, who spoke about the work being done on Rails 3. He discussed several aspects about Rails 3, also showing it in the context of the various existing implementations of Ruby (MRI, IronRuby, JRuby, MacRuby and Rubinius).

To finish the first day, we had a pleasant session of lightning talks. The presentations included: 1) Guru-SP (São Paulo’s Ruby User’s Group), Ruby Inside Brasil,2)  how not to make an event (very funny talk of the people of the Oxente Rails conference), 3) Aldinho (a 11-year-old boy) made his 15-minute-blog using Rails, devise: flexible authentication solution for Rails apps, 4) Guilherme Chapiewski and Henrique Bastos talked about how small acts make great revolutions (it was about how the developer’s community of Rio de janeiro has grown through some simple iniatives like Coding Dojo Rio, PythonCampus, hackframps, Dev in Rio and others), 5)  a real time web application for a basketball marathon. There were a few other speakers also and Daniel, who closed the session playing two funny songs about automated tests and Fabio Akita. 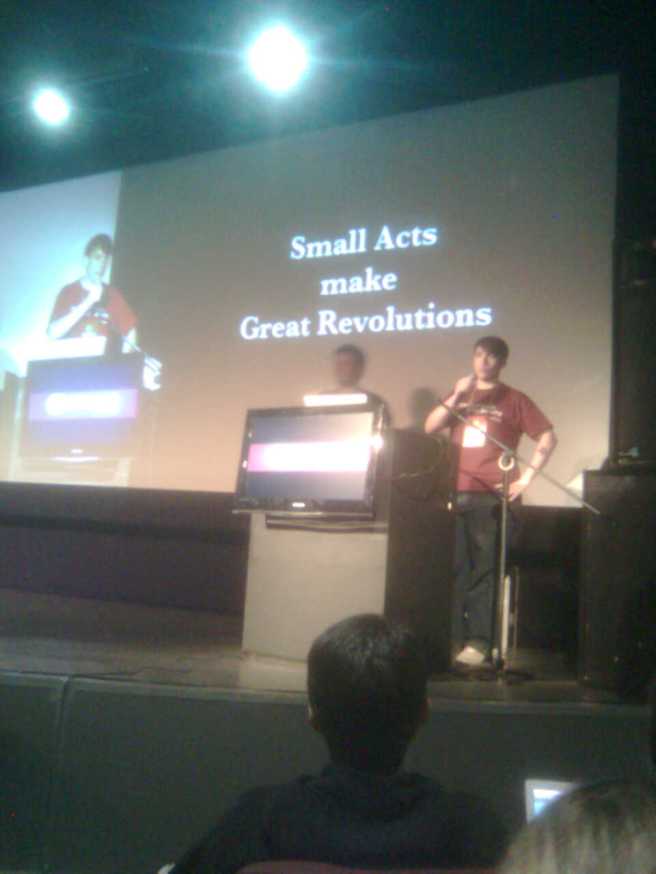 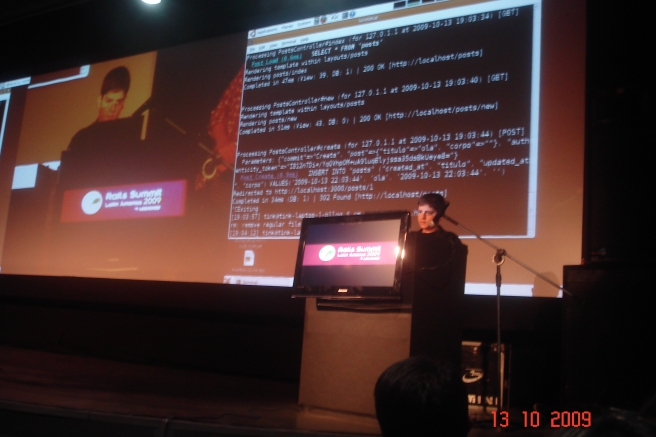